Cereals: Types and Benefits Of Cereals 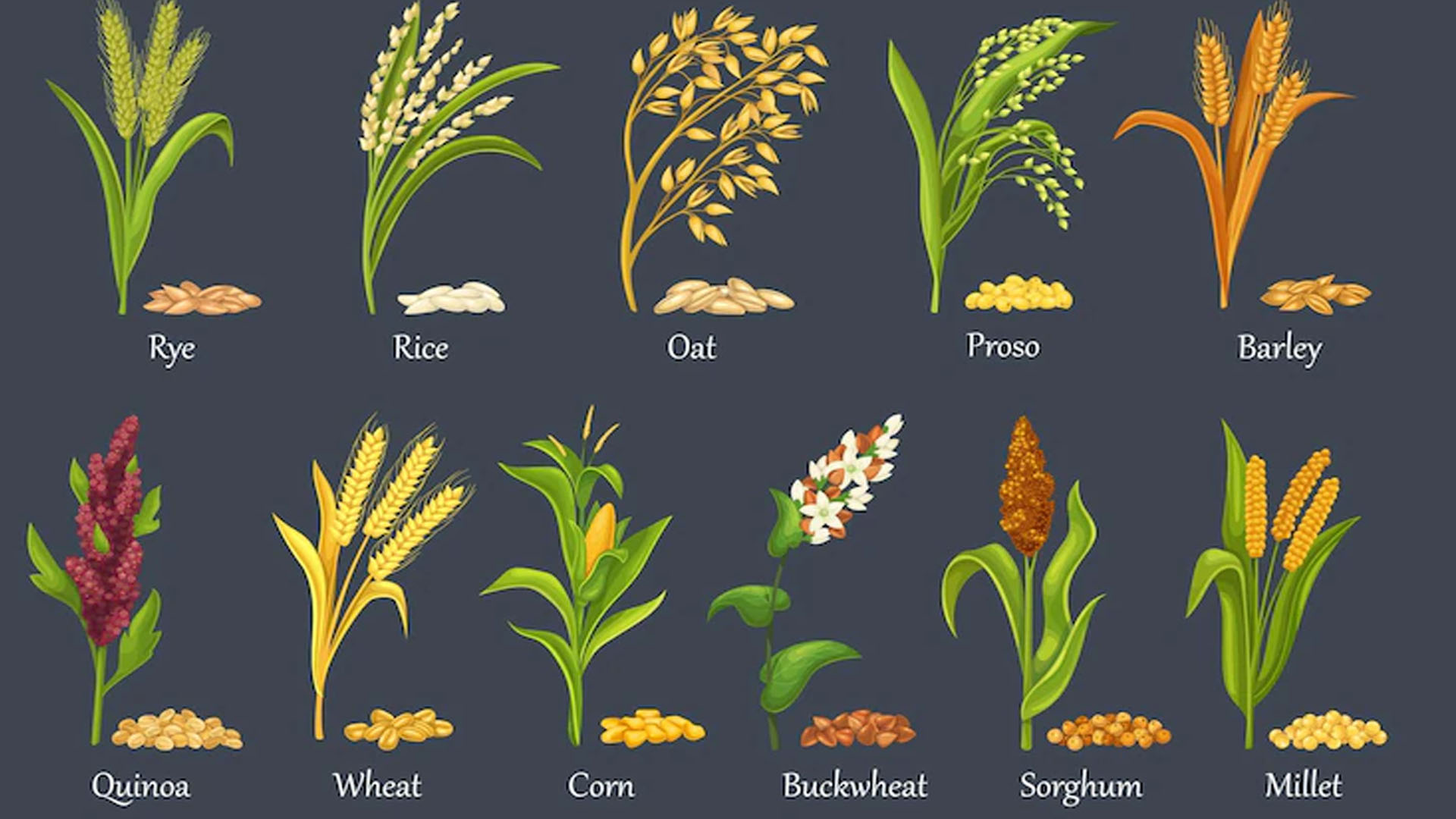 Cereals are a popular breakfast food. They are usually eaten with milk or yogurt and some people add fruits, nuts or sugar.

Cereals come in a variety of shapes, sizes and colors. There are many different types of cereals to choose from – for instance, there are whole grain cereals, high protein cereals, low sugar cereals and so on. The cereal is not the only thing that you can eat while having breakfast: you can also have fruit salad, eggs with toast or pancakes with syrup and bacon.

Cereals are grains that have been processed to remove the inedible parts, like the husks, and then to break them into small pieces.

Cereals are grains that have been processed to remove the inedible parts, like the husks, and then to break them into small pieces. Cereals provide a significant portion of dietary fiber and complex carbohydrates. They also provide protein, vitamins, minerals and other nutrients.

The term cereal derives from Ceres (Roman goddess of agriculture) because these foods were originally based on oats and wheat which were grown as crops.

Cereal is a breakfast staple for many people because it is quick to prepare, and most cereals are also relatively healthy. Cereal can be made with a variety of ingredients, such as grains, sugar, milk, fruit or other flavorings.

The healthiest cereals are those that have whole grains and no added sugars. Whole grain cereal is higher in fiber than refined grains and has been shown to lower the risk of heart disease and diabetes.

Many people enjoy cereal with milk or yogurt instead of water or juice because it adds protein and calcium to the meal.

Cereal generally contains some sugar because sugar helps make them taste good. However, some cereals are “sugar free” or “low sugar.” These options contain less than 19 grams of sugar per serving.

These grains are the main source of energy contributing 70-80% of daily energy intake in majority of Indians.

In view of large intake, cereals are also important source of several nutrients such as: protein, calcium, iron and B-complex vitamins. Cereals contain 6-12% protein which is generally deficient in lysine and provides more than 50% of daily protein intake.

What Are The Different Types Of Cereal?

Cereal is a breakfast food that is made from grain. It consists of small pieces of crushed wheat, oats, corn, rice or other grains that are mixed with milk and then eaten by dipping the cereal into a bowl of cold milk.

There are many different types of cereal because there are many different types of ingredients that can be used to make them. Some cereals are made from whole grains which contain all parts of the grain. These cereals include wheat, oats, barley and rye. Other cereals may use refined grains which only contain the starchy part of the grain like corn and rice. Cereals can also be made with other ingredients like soybeans or nuts.

Here are some the types of cereals explained with their health benefits:

Wheat is an important crop in the world. It provides humans with a source of dietary fiber and protein. In addition, it is also used to make flour for breads and other baked goods as well as a number of other food products.

The grains are harvested when they are ripe and then threshed to remove the chaff. The kernels are then ground into flour, which is used in many different types of food products.

Wheat is a small, but important crop for the world. It is one of the most important crops for human consumption and it can also be used to make many other products. Wheat provides many benefits and nutrition to humans, animals, and plants.

There are many different types of wheat that have different applications. Some are grown to produce flour while others are grown for their seeds or straws. There are even some varieties that grow well in certain climates while other varieties don’t do as well in those climates.

Oats are a type of cereal grain that is often grown in cold climates. They are rich in nutrients, high in fiber, and can be eaten for breakfast or dinner.

Oats have been shown to reduce cholesterol levels and to help lower blood pressure. Oats are also a great source of protein, which is important for athletes and bodybuilders.

Barley is an extremely versatile and nutritious grain. It is a good source of fiber, protein, vitamins and minerals.

Barley is one of the most ancient grains in human history. The word barley comes from the Old English bere which means barley or grain. Barley benefits include its high nutritional value, ability to be used in many dishes, and its possible medicinal properties.

Sorghum is a cereal grain that can be used to make flour, syrup, and beer. It is gluten-free and has a high nutritional value. It contains small amounts of beta-carotene.

Sorghum is an ancient cereal crop that has been around for over 8,000 years. It was first domesticated in Africa and Asia about 30,000 years ago. The Sorghum plant produces edible stalks called grains which are used as food for humans and animals alike.

Buckwheat is a plant that produces seeds in a fruit called a groat. Buckwheat is gluten-free, making it a good substitute for wheat flour.

Buckwheat is rich in nutrients and contains more protein than any other grain. It also has more iron and calcium than most grains, which makes it an excellent choice for vegetarians or vegans who want to get their protein from plants rather than animal sources.

Buckwheat can be used as an alternative to wheat flour in many recipes, including pancakes, waffles, muffins, quick breads and pizzas.

It can also be used in place of rice or pasta for dishes like risotto or paella.

It can be used as an alternative to rice or other grains.

Corn is a cereal grain that is the most widely grown crop in the United States. It is also called maize or Indian corn. Corn provides a good source of protein, vitamin C, and dietary fiber. The most popular use of corn is as an ingredient in processed foods such as corn flakes, corn chips, and popcorn.

Corn has many benefits for people’s health. It contains vitamins and minerals that are essential for good health. Corn also contains protein which helps build muscles, maintain cells, and make hormones and enzymes.

Corn can be eaten whole or processed into products like flour or oil to make food more tasty and nutritious for people to eat.

The most popular use of corn is in processed foods such as corn flakes, chips, popcorn etc., which are made from the starch on the inside

Millets are the most important cereal grain in the world. They are nutritious and easy to digest. The millet plant is a staple food for more than two billion people in Asia, Africa, and Latin America.

Millet is a cereal grain that is rich in nutrients and can be eaten as a staple food for those who cannot afford expensive grains. It has been cultivated by humans for over 12,000 years. It is also one of the most important crops for birds, providing them with about half their nutritional needs in winter months when there are few other foods available

The seeds of millets can be ground into flour or boiled whole to make porridge or gruel. They can also be used to make flatbreads, noodles, dumplings, pancakes and pastries

Millets are a type of cereal that is made from the seeds of various species in the genus “Panicum.” The most common millet types are ragi, foxtail millet, pearl millet finger millets, proso millets, little millets, Kodo millets, and barnyard millets.

Cereals are a staple breakfast food in many households. They are a convenient and quick way to get your daily servings of grains and nutrients.

However, they can also have some negative side effects depending on the type of cereal you eat. For example, cereals that contain high amounts of sugar or artificial sweeteners may cause an increased risk for type 2 diabetes and obesity.

Cereals are a popular breakfast food. They can be eaten as a quick breakfast or as an afternoon snack. Cereals are made from grains and other ingredients that are mixed with milk, water, or fruit juice to form a cereal paste. Cereals have been around for centuries and they have come a long way since their inception. Today, there are many different types of cereals on the market that offer something different in terms of flavor, texture and nutritional value.