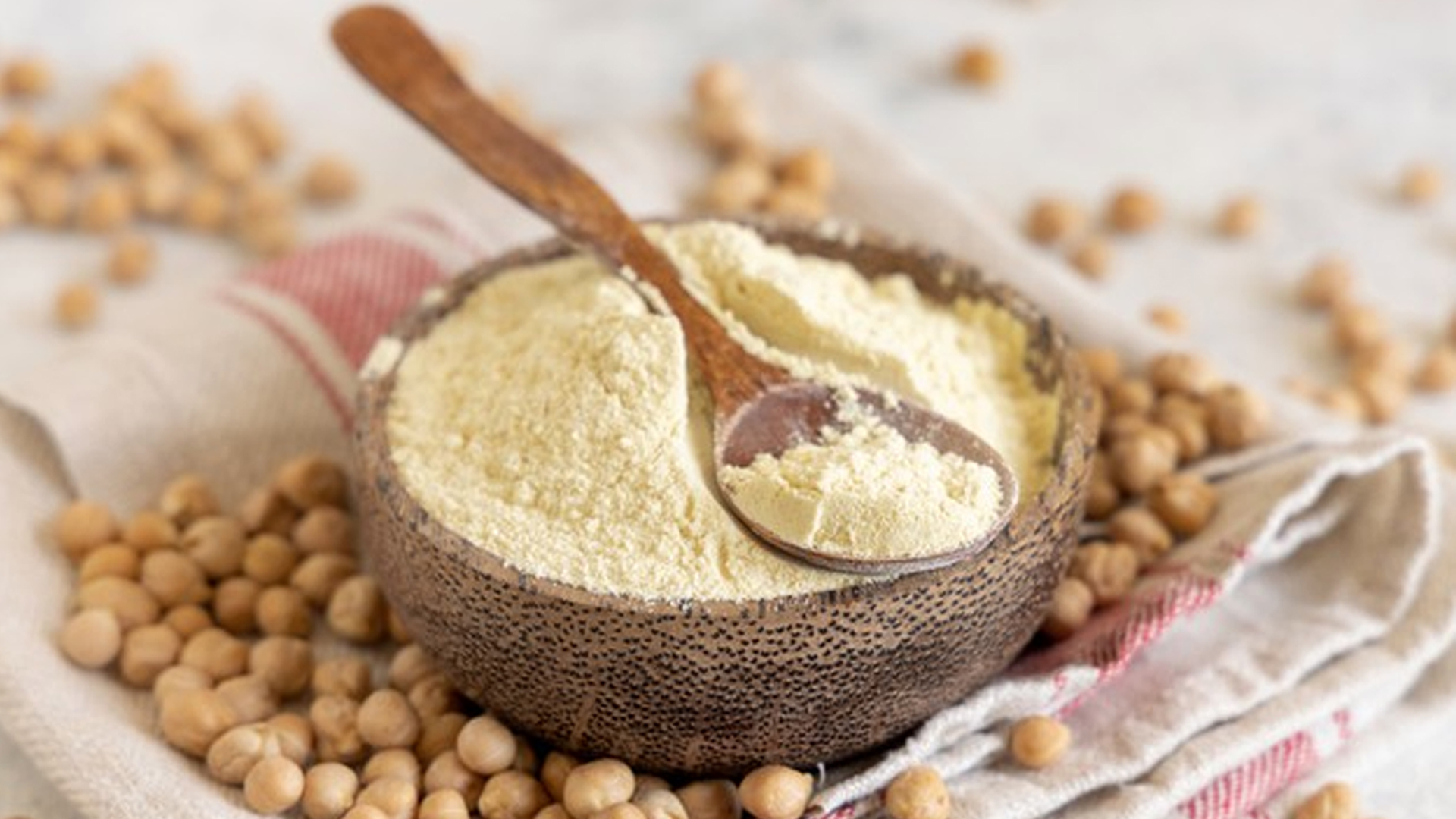 Besan flour, gram flour, garbanzo bean flour or chickpea flour, is a pulse flour made from a variety of ground chickpeas known as Bengal gram, has been a staple in Indian cooking for centuries. This article tells you about the nutritional facts of besan flour.

Besan flour is a staple ingredient in the cuisine of the Indian subcontinent, including in Indian, Bangladeshi, Burmese, Nepali, Pakistani, and Sri Lankan cuisines. This flour, has recently grown popularity across the world as a gluten-free alternative to wheat flour.

Chila, a very popular fast food and snack or breakfast made from gram flour batter. Gram flour contains high quantity of carbohydrate and no gluten. Compared to other flours, gram flour is high in protein content. It is also quite popular in Italian and French cuisines.

Besan flour can keep your brain younger, because of the presence of Folic acid.
Besan hair pack nourishes your hair and makes it healthy and shiny.

Besan flour is loaded with important nutrients. It contains low calories, antioxidants and rich in protein, fiber and vitamins and minerals.

Besan flour contain beneficial antioxidants called polyphenols. Plant polyphenols specifically have been shown to decrease free radicals in food and reverse some of the damage they can cause in your body.

Antioxidants are compounds that fight against unstable molecules called free radicals in your body, which are thought to contribute to the development of various diseases. Using chickpea flour in processed foods seems to reduce their content of harmful acrylamide.

Besan flour has fewer calories than regular flour. It is a great alternative to wheat flour if you’re trying to reduce your calorie intake. Compared to the same serving of refined wheat flour, 1 cup of chickpea flour has about 25% fewer calories.

Besan flour contains high protein than other flours, including white and whole-wheat flour. One cup serving of chickpea flour provides 20 grams of protein, compared to 13 grams in white flour and 16 grams in whole-wheat flour. Chickpeas are an ideal protein source for vegetarians, as they provide nearly all of the essential amino acids.

Body needs protein to build muscle and recover from injury and illness. It also plays an important role in weight management. High-protein foods keep you fuller longer, and your body has to burn more calories to digest these foods.

Besan flour is packed with fiber, as chickpeas are naturally high in this nutrient. Fiber offers numerous health benefits, and chickpea fiber, in particular, has been associated with improved blood fat levels.

One cup of chickpea flour provides about 10 grams of fiber, triple the amount of fiber in white flour. Besan flour may decrease hunger is by regulating the hunger hormone ghrelin. Lower ghrelin levels are thought to promote feelings of fullness.

Besan flour is rich in vitamin and minerals and packs more folate than you need in a day. This vitamin plays an important role in preventing spinal cord defects during pregnancy. The women who used fortified flour also had 26% higher blood folate levels than the control group.

It is also a excellent source of several minerals, like iron, magnesium, phosphorus, copper, and manganese.