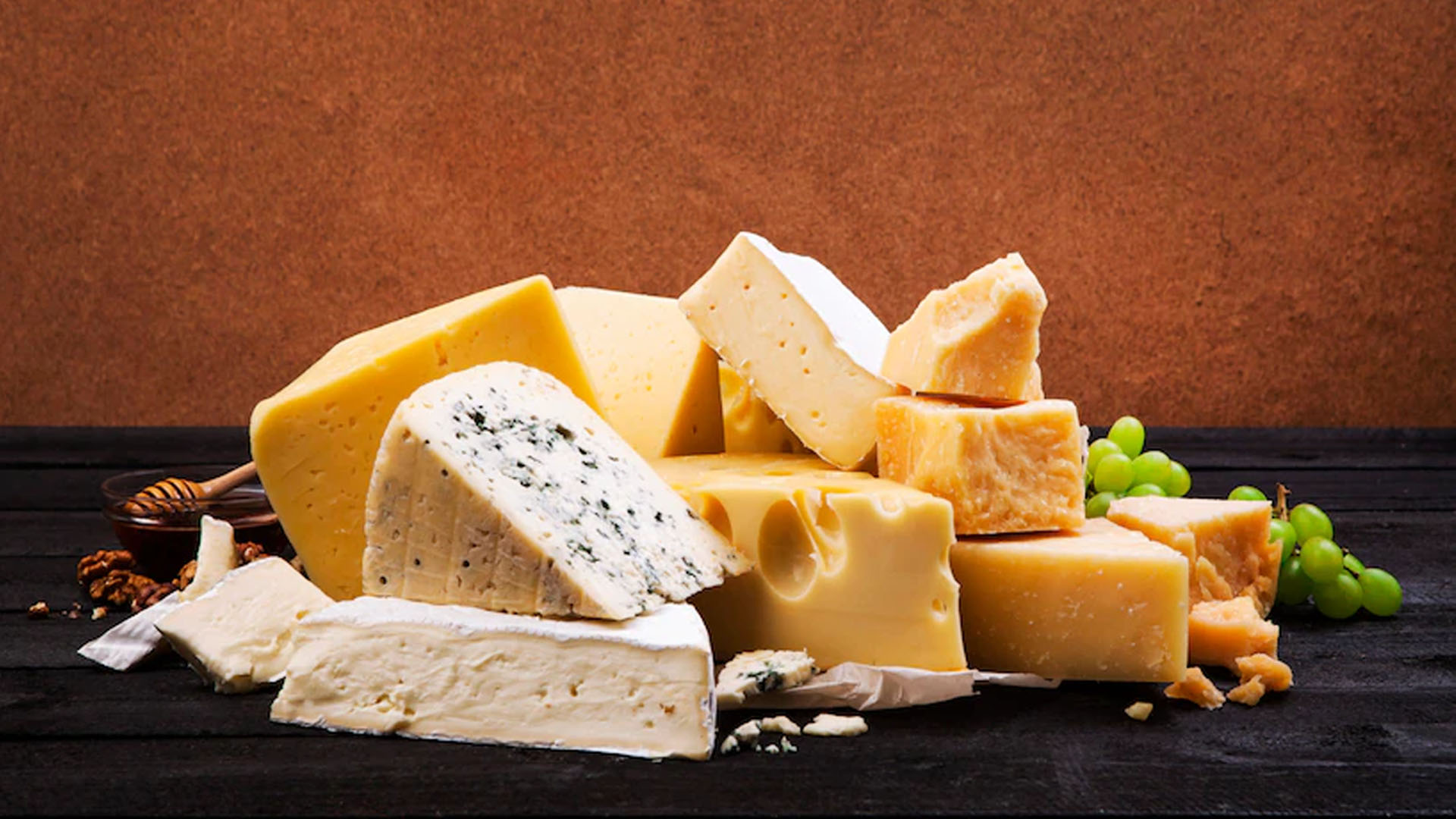 Cheese is a dairy product that originated in ancient times and is still popular today. It is made by coagulating the milk of cows, goats, or sheep. It consists of curds of protein-rich milk, which are formed into solid pieces. Cheese can be produced in a wide variety of flavors and textures. Cheese is made of two components – curds and whey. The curds are the solid part and the whey is the liquid part.

Cheese has been produced in the Middle East for thousands of years, with the earliest evidence of cheese making dating back to around 5000 BC. Cheese was one of the first foods to be made from cow’s milk and it has since been used as a source of protein, calcium, and vitamin D.

Cheese is often eaten as a snack or part of a meal with bread, crackers, and fruit.

Cheese is a staple food for many people around the world. There are different types of cheese that come from different places, and they have their own unique flavors. Types of cheese include:

Mozzarella is a soft, white cheese with high moisture content. It originated in Italy and is usually made from Italian buffalo or cow’s milk. It also contains bacteria that act as probiotics, including strains of Lactobacillus casei and Lactobacillus fermentum. Mozzarella is lower in sodium and calories than most other cheeses. One ounce (28 grams) of full-fat mozzarella contains:

Both animal and human studies show that these probiotics may improve gut health, promote immunity, and fight inflammation in your body.

One study in 1,072 older adults found that drinking 7 ounces (200 ml) per day of fermented dairy containing Lactobacillus fermentum for 3 months significantly reduced the duration of respiratory infections, compared to not consuming the drink.

Therefore, dairy products like mozzarella that contain this probiotic may strengthen your immune system and help fight infections. However, more research is needed.

Cheddar is a widely popular semi-hard cheese from England. it is made from cow’s milk that has been matured for several months, it can be white, off-white, or yellow. The taste of cheddar depends on the variety, ranging from mild to extra sharp.

In addition to being rich in protein and calcium, cheddar is a good source of vitamin K — especially vitamin K2. Vitamin K is important for heart and bone health. It prevents calcium from being deposited in the walls of your arteries and veins. Inadequate vitamin K levels can cause calcium buildup, inhibiting blood flow and leading to an increased risk of blockages and heart disease.

To prevent calcium deposits, it’s important to get enough vitamin K from foods. As K2 from animal foods is better absorbed than K1 found in plants, K2 may be especially important for preventing heart disease.

Eating cheddar is one way to increase your vitamin K2 intake. You can add it to charcuterie plates, vegetable dishes, burgers, and eggs.

Cottage cheese is a soft, white cheese made from the loose curds of cow’s milk. It’s thought to have originated in the United States.

Cottage cheese is much higher in protein than other cheeses. A 1/2-cup (110-gram) serving of full-fat cottage cheese provides:

Since cottage cheese is high in protein but low in calories, it is often recommended for weight loss.

Several studies indicate that eating high-protein foods like cottage cheese can increase feelings of fullness and help decrease overall calorie intake, which in turn may lead to weight loss.

A study in 30 healthy adults found that cottage cheese was just as filling as an omelet with a similar nutrient composition.

Thus, adding cottage cheese to your diet may help you feel fuller after meals and reduce your calorie intake.

It tastes great spread on toast, blended into smoothies, added to scrambled eggs, or used as the base for dips.

As the name suggests, Swiss cheese originated in Switzerland. This semi-hard cheese is normally made from cow’s milk and features a mild, nutty taste.

Its signature holes are formed by bacteria that release gases during the fermentation process.

One ounce (28 grams) of Swiss cheese made from whole milk contains:

Since it is lower in sodium and fat than most other cheeses, Swiss cheese is often recommended for anyone who needs to monitor their salt or fat intake, such as people with high blood pressure.

That said, most studies on the effects of Swiss cheese compounds on blood pressure have been isolated to test tubes. Human research is needed.

To incorporate Swiss cheese into your diet, you can eat it with fruit or add it to sandwiches, egg bakes, burgers, and French onion soup.

Feta is a soft, salty, white cheese originally from Greece. It’s typically made from sheep’s or goat’s milk. Sheep’s milk gives feta a tangy and sharp taste, while goat’s feta is milder.

Since feta is packaged in brine to preserve freshness, it can be high in sodium. However, it is typically lower in calories than most other cheeses.

One study in 40 overweight adults found that taking 3.2 grams per day of a CLA supplement for 6 months significantly decreased body fat and prevented holiday weight gain, compared to a placebo.

Thus, eating CLA-containing foods like feta may help improve body composition. In fact, feta and other cheeses made from sheep’s milk typically have more CLA than other cheeses.

However, research is limited and has mostly focused on CLA supplements.

To add feta cheese to your diet, try crumbling it over salads, adding it to eggs, or whipping it into a dip to eat with fresh vegetables.

Parmesan is a hard, aged cheese that has a gritty texture and a salty, nutty flavor. It’s made from raw, unpasteurized cow’s milk that’s aged for at least 12 months to kill harmful bacteria and produce a complex flavor.

The final product is loaded with nutrients. One ounce (28 grams) of Parmesan cheese provides:

A 1-ounce (28-gram) serving also contains close to 30% of the RDI for phosphorus.

Since Parmesan is rich in both calcium and phosphorus — nutrients that play a role in bone formation — it may promote bone health.

One study in around 5,000 healthy Korean adults found that higher dietary intakes of calcium and phosphorus were significantly associated with better bone mass in certain parts of the body — including the femur, the longest human bone.

Finally, since it’s aged for a long time, Parmesan is very low in lactose and can usually be tolerated by most people who have lactose intolerance.

Grated Parmesan can be added to pastas and pizzas. You can also sprinkle it on eggs or spread slices on a cheese board with fruit and nuts.

Goat cheese, also known as chevre, is a tangy, soft cheese made from goat’s milk. It is available in several forms, including spreadable logs, crumbles, and varieties made to resemble Brie.

In addition, goat’s milk has more medium-chain fatty acids than cow’s milk. These types of fat are rapidly absorbed in your body and less likely to be stored as fat.

Furthermore, goat cheese may be easier for some people to digest than cheese made from cow’s milk. This may be because goat’s milk is lower in lactose and contains different proteins.

In particular, goat cheese contains A2 casein, which may be less inflammatory and less likely to cause digestive discomfort than the A1 casein found in cow’s milk.

Ricotta is an Italian cheese made from the watery parts of cow, goat, sheep, or Italian water buffalo milk that are left over from making other cheeses. Ricotta has a creamy texture and is often described as a lighter version of cottage cheese.

The protein in ricotta cheese is mostly whey, a milk protein that contains all of the essential amino acids that humans need to obtain from food.

One study in 70 overweight adults found that taking 54 grams of whey protein per day for 12 weeks lowered systolic blood pressure by 4% compared to baseline levels. However, this study focused on whey supplements rather than whey from dairy foods.

While ricotta may offer similar benefits, more research on whey from whole foods is needed.

Ricotta cheese tastes delicious in salads, scrambled eggs, pasta, and lasagna. It can also be used as a base for creamy dips or served with fruit for a sweet-and-salty snack.

Most cheeses are a good source of protein and calcium, and some offer additional health benefits. In particular, certain cheeses may provide nutrients that promote gut health, aid weight loss, improve bone health, and decrease your risk of heart disease.

However, as some cheese can be high in sodium and/or fat, it’s still worth keeping an eye on your intake.

Overall, cheese can be a nutritious addition to a healthy, balanced diet.