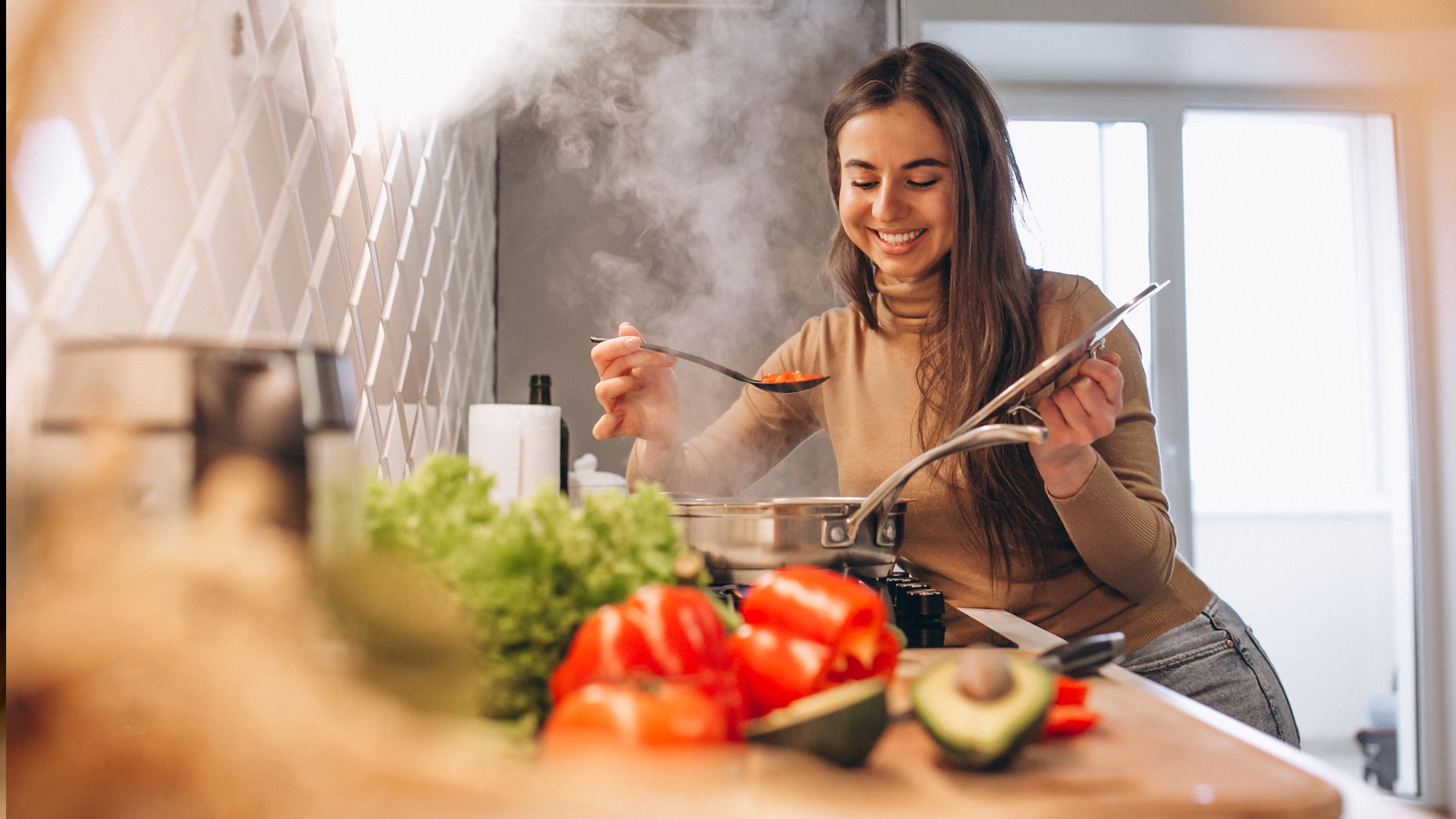 Types of cooking methods are the techniques used to cook different types of food. Heat may be transferred to the food during cooking by conduction, convection, radiation or by the energy of microwaves-electronic heat transfer. Water or steam and air or fat or combination of these are used as cooking media.Moist heat involves water and steam. Air or fat are used in dry heat. Foods can also be cooked by microwaves.

Boiling is cooking foods by just immersing them in water at 100 degree celsius and maintaining the water at that temperature till the food is tender. Water is said to be boiling when large bubbles are seen rising constantly on the surface of the liquids and then breaking rapidly. Water receives heat by conduction through the sides of the utensil in which food is cooked and passes on the heat by convection currents which equalise the temperature and become vigorous when boiling commence.

Foods may be boiled in any liquid which is bubbling at the surface such as stock, milk, juices or syrups. Foods that are cooked are rice, eggs dals, potatoes, meat, sago and beetroot. Boiling can be done with excess amount of water or with sufficient water.

Boiling is generally used in combination with simmering or other methods ex:cooking rice, vegetables, dals.

Loss Of Nutrients: If excess water is used in cooking and the water is discarded 30-70% water soluble vitamins like vit-C may be lost. To prevent the losses water should be used in the soups, rasam, sambar and dal. Some vegetables may also loss minerals like sodium, potassium, calcium due to leaching.

Loss Of Colour: Water-soluble pigments, like betalains from beetroot may be lost, beetroot should be cooked along with the skin to prevent the loss of colour.

Time Consuming: Boiling may take time and fuel may get wasted.

Loss Of Flavour And Texture: Boiled foods are not considered tasty because flavour compounds are leached into the water. Over-boiling of food may make the food mushy.

When foods are cooked in a pan with a well-fitting lid at temperature just below the boiling point 82-99°C of liquids in which they are immersed the process is known as simmering. It is useful method when foods have to be cooked for a long time to make it tender as in case of cheaper cuts of meat, fish, cooking custards, kheer,vegetables and carrot halwa. This method is also employed in making soups and stocks.

This involves cooking in the minimum amount of liquid at a temperature of 80-85°C that is below the boiling point. Foods generally poached are eggs, fish and fruits, the addition of little salt or vinegar to the cooking liquid lowers the temperature of coagulation. Eggs gets cooked quickly by poaching.

This is a gentle method of cooking in a pan with a tight-fitting lid, using small quantities of liquid to cover only half the food. The food above the liquid is cooked by the steam generated within the pan. The liquid is brought to a boiling point and then the heat applied is reduced to maintain the cooking at simmering temperatures i.e.,98°C. Stewing is a slow method of cooking taking from 2 to 4 hours depending upon the nature and volume of the foods being stewed. This method is used for cooking cheaper cuts of meats along with some root vegetables and legumes all put in the same cooking pot and cooked in stock or water. ex: apples.

This method requires the food to be cooked in steam. The water should be boiled before the food is placed in the steamer. Here the food gets cooked at 100°C . Steaming is generally done in special equipment designated for the purpose e.g., Idly cooker and Rukmani cooker. There are three types of steamings.

Dry Steaming: Here double boiler is used for cooking the food containing over hot or boiling water. This process is used for such preparations as sauces and custards.

In steaming, food is cooked by steam from added water while in waterless cooking the steam originates from the food itself. Cooking food wrapped in an aluminium foil is another form of thes method.

Recipes made by steaming: Idly, Dhokla, Rice, Ragi Puttu, Idiyappam, Appam, Kolukattai, Undrallu and custard.Puttu made from fish or prawns .

In pressure cooking, escaping steam is trapped and kept under pressure so that the temperature of the boiling water and steam can be raised above 100°C and reduce cooking time.

Boiling for 1 hour at 100 °C can be reduced to half an hour at 110°C and further can be reduced to 1/4 hour at 120°C. A common practice in pressure cooking is to allow a copious flow of steam from the release valve before capping it with weights.