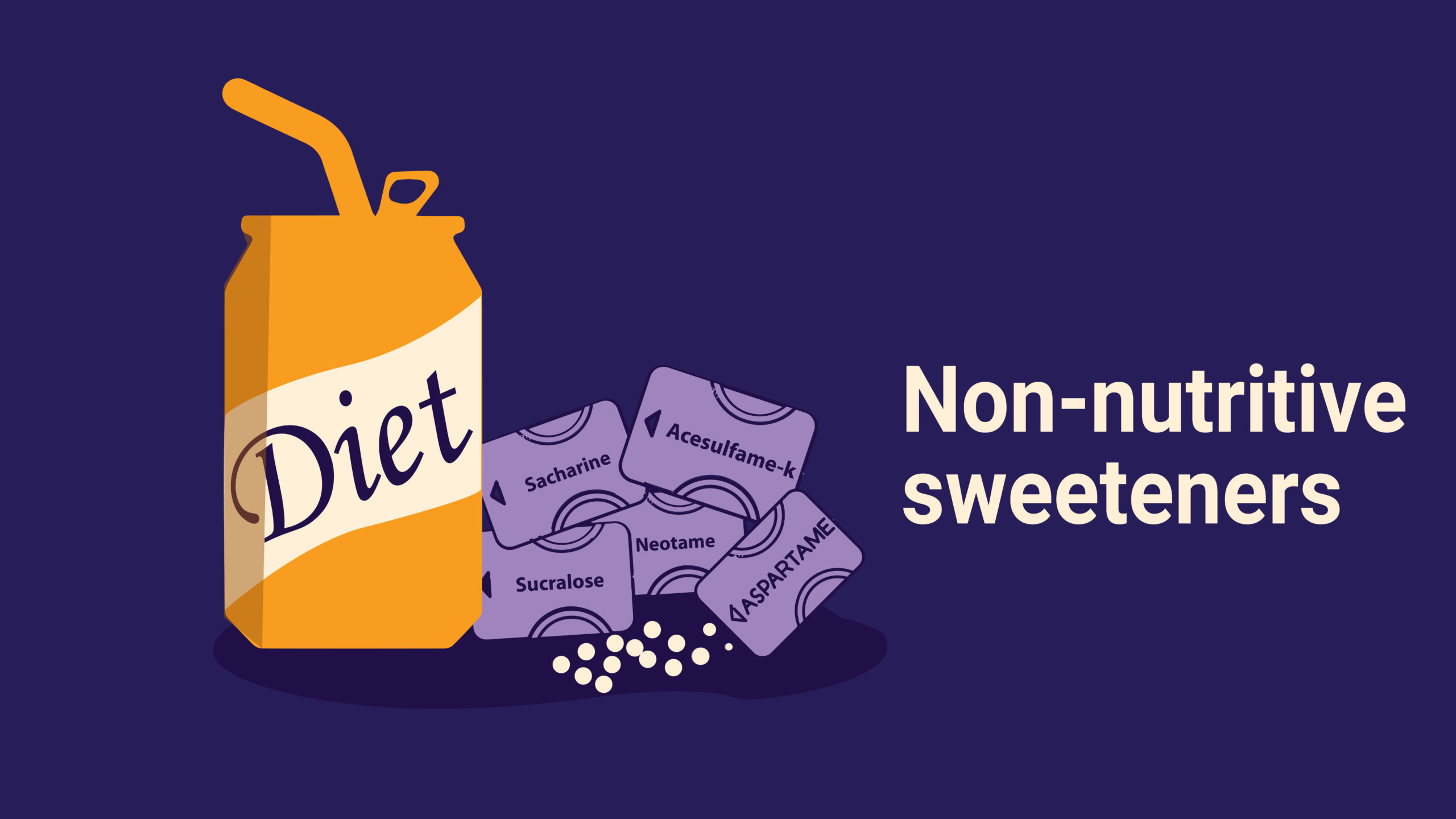 Non-Nutritive Sweeteners (NNSs) are the artificial sweeteners with zero calories and no nutrients present in them. These are called non-nutritive sweeteners because they lack all nutrients that are available in all foods but are sweet in taste. The Food and Drug Administration (FDA) as introduced and approved some of the non-nutrient sweeteners.

Many studies recommends limiting added sugars because too much sugar can lead to many health issues like weight gain. Along with obesity, it can increase heart risks by increasing triglyceride levels.

Generally, sugar added foods like drinks and foods are high in sugars and low in nutritional values. So, to avoid some health problems, non-nutritive sweeteners are introduced by replacing sugary foods and drinks with sugar-free options containing NNSs. It can also help diabetic people to control and manage blood glucose levels. For example, diet soda is better than high calorie soda.

Non-Nutritive or Natural sweeteners are generally safe as there’s no health advantage or disadvantage by consuming any particular type of added sugar.

These are some of the safest NNSs that has approved by FDA:

Aspartame is an artificial sweetener which comes under non-saccharide group which is sweeter more than 100 times than sucrose. This is generally used in many beverages and food items as artificial sweetner with no nutrients. Aspartame is sold in the market under brand names such as NutraSweet® and Equal®.

The consumption of aspartame, can elevate the levels of phenylalanine and aspartic acid in the brain. Presence of these compounds in our body can inhibit the synthesis and release of neurotransmitters, dopamine, norepinephrine, and serotonin, which are known as hormones which are useful for many functions and which also act as regulators of neurophysiological activity.

So, consumption of these aspartame in high quantities is not much good as they inhibit many essential functions. The FDA has set safe human consumption levels at 50 milligrams per kilogram of bodyweight per day. Aspartame when heated in high temperatures, it gets breakdown, so aspartame foods are not needed to heat much.

Aspartame mostly affect the people with phenylketonuria (PKU). This is a rare genetic disorder (by birth) in which the body can’t break down phenylalanine, an amino acid found in many foods. Other than this, it individually doesn’t cause any serious health issue.

Acesulfame potassium (k), also known as acesulfame K or Ace K. It is a calorie-free sugar substitute used as artificial sweetener. It is sold under under the trade names Sunett and Sweet One.

As aspartame, this is also used in preparation of foods and beverages. Moreover, it is also used in baking process as it is heat resistant. The acceptable daily intake of acesulfame- k is about 15 mg per kilogram (mg/kg) of body weight per day according to FDA.

Saccharin (benzoic sulfimide) is known as sodium saccharin which is an artificial sweetener with no food energy. It has a bitter or metallic taste, mostly when consumed at high concentrations. It is about 200–600 times sweet as sucrose. According to FDA suggestions, saccharine consumption for humans is safe while taken 15 milligrams per kilogram of body weight per day.

Saccharin is available in brand names include Sweet and Low®, Sweet Twin®, Sweet’N Low®, and Necta Sweet®. Saccharin is used to prepare confectionery products such as drinks, candies, cookies, and also in pharmaceuticals.

Saccharine can cause some negative effects on human health conditions like interrupting the balance of bacteria in gut. But generally saccharine is one of the good and safest artificial sweetener.

Some of the side effects caused by saccharine are as follows:

Saccharin is found in many processed foods and drinks, and in baking products and sweets.

Sucralose is also one of the artificial sweetener and use as sugar substitute. As most of the sucralose is not broken down by the body, it is known as non caloric sweeteners. The safest human consumption is about 5 milligrams for each kilogram of body weight (FDA). Sucralose is available in the market with brands like – Splenda, Sugar Free Natura, Zero, etc.

Sucralose also include tabletop sweeteners, Which are mostly useful in making chewing gums. On heating sucralose many harmful compound may release, so it is better to avoid heating at high temperatures. But it is said to be heat stable.

The most common side effects of sucralose are as follows:

Neotame is also a non caloric non nutritive sweetener. It is known by the trade name Newtame. Neotame is 8000 times sweeter than sucrose. It has no taste when compared to other sweeteners. It is heat stable and used in cooking and baking.

Some of the side effects of Neotame:

Infact consuming too much added sugar, even natural or artificial sweeteners, may lead to health problems, such as tooth decay, weight gain, poor nutrition and increased triglycerides.