Health Benefits and Nutrition of Jaggery 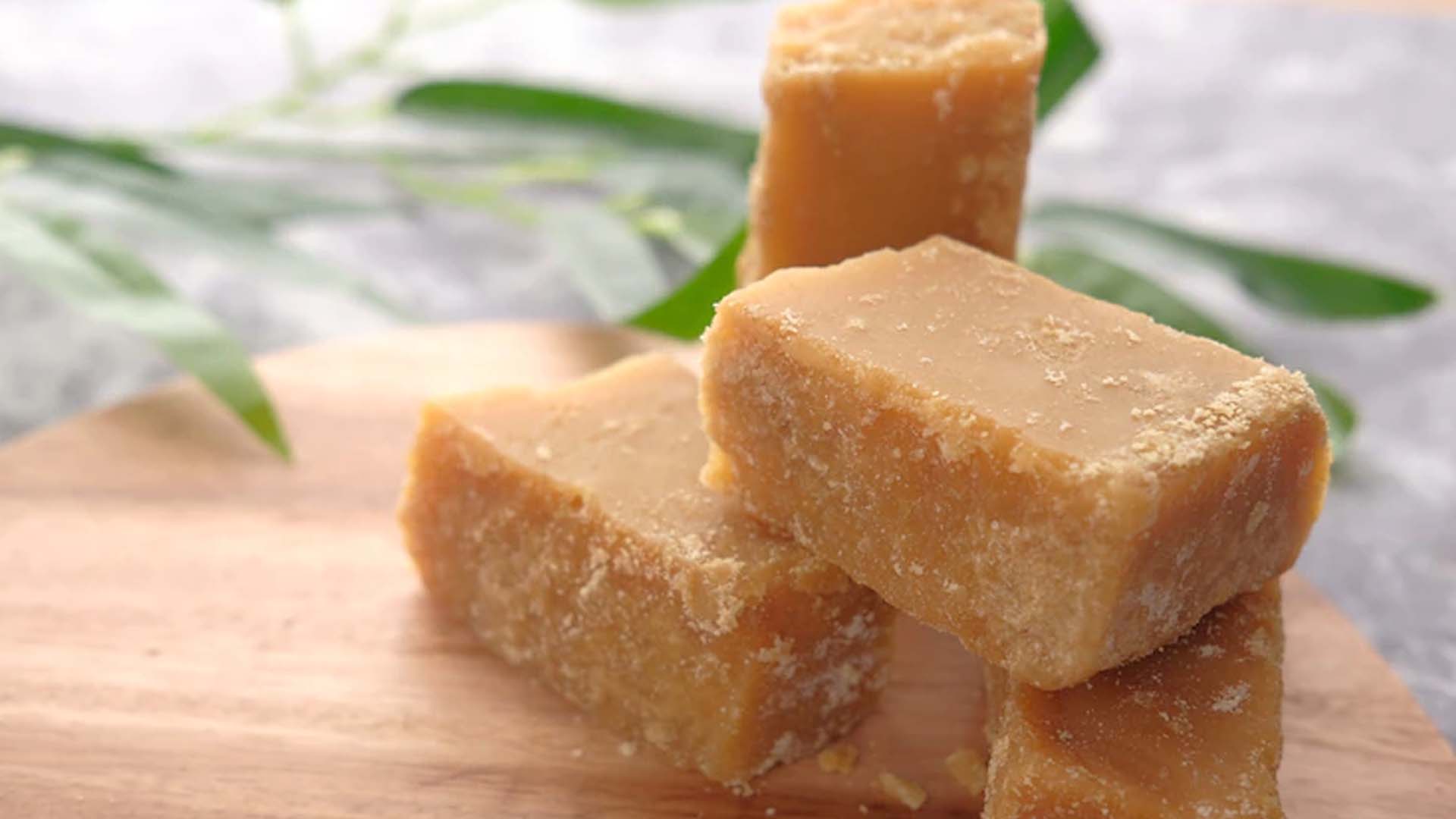 Jaggery has been used for thousands of years in India. It was originally called “sukkar” which means sugar or syrup. The word jaggery came into use after the British introduced cane sugar to India in the 18th century.

Jaggery is a traditional Indian sweet that is made from sugarcane juice and molasses. Jaggery can be found in almost every Indian household. It is used as a sweetener in many dishes like desserts, curries, chutneys, and sauces.

Jaggery is a type of sugar that is made from the sap of the sugarcane plant. It is commonly used in Indian cuisine, especially in the states of Maharashtra and Goa for cooking and desserts. Jaggery can be found in many different forms like cubes, blocks, powder, and syrup.

Most of the world’s jaggery is produced in India. Jaggery is often made with sugar cane, but it is also created with date palm sap in several countries.

Jaggery is a type of sugar that is made from sugarcane and/or sugar beets. It has a light brown color and sometimes has a crystalline structure.

How is Jaggery Made?

Jaggery is a type of unrefined sugar made from pure cane juice or palm. The process of making jaggery is different from other types of sugar as it doesn’t use an acid to break down the sucrose.

Jaggery is made by boiling sugar, water, and molasses in a pot or pan until the mixture turns into thick enough syrup. The syrup then gets poured into molds to cool down slowly. Finally, the jaggery is cut into pieces before selling it. It takes about three hours to produce one kilogram of jaggery.

Jaggery is known to come in different colors and with varying textures. This is what they are grading by when they grade jaggery. Interestingly, Indians value lighter shades more than darker ones.

This lighter, “good quality” jaggery generally contains more than 70% sucrose. It also contains less than 10% isolated glucose and fructose, with 5% as minerals. It is most often sold as a solid block of sugar, but it’s also produced in liquid and granulated forms.

Jaggery is more nutritious than sugar because it contains more nutrients like potassium and magnesium.

Molasses is the name of a type of sugar found in the mixture that becomes jaggery by heating it. Molasses is a nutritious by-product of the sugar making process, which is usually removed when making refined sugar. Including the molasses adds a small amount of micronutrients to the final product.

The exact nutrition profile of this sweetener can vary, depending on the type of plant used to make it (cane or palm).

According to a source, 100 grams (half a cup) of jaggery may contain:

However, this is a 100-gram serving, which is much higher than you would generally eat in one sitting. You would probably consume closer to a tablespoon or teaspoon. It may also contain small amounts of B vitamins and minerals, including calcium, zinc, phosphorus and copper.

What Can Jaggery Be Used For?

Jaggery, also spelled Gur, jaggery, or Gur, is a type of sugar that is made from various types of pure cane juice that has been boiled for a long time. It can be used as a sweetener, an ingredient in desserts, or even sprinkled on your breakfast cereal.

Jaggery can be used in many ways such as:

Jaggery has been used as a sweetener in India for centuries. It is a popular food item and it can be found in many Indian dishes such as biryanis, desserts, and sweets.

It also contains minerals such as calcium, magnesium, phosphorus and potassium which are essential for bone health and teeth formation. It was once considered to be the best medicine for treating anemia and other diseases like tuberculosis and leprosy.

Jaggery can be found in the form of white or brown sugar. The difference between these two types of jaggery is the amount of molasses that they have in them. It also depends on how long the jaggery has been exposed to air before it gets mixed with water to become granulated sugar.

Jaggery has been used in India for centuries as a sweetener and digestive remedy. Jaggery can help with digestive health by improving the digestion process and lowering the risk of diabetes, heart disease, high blood pressure, obesity, and other chronic diseases.

Jaggery also provides a feeling of satiety and satisfaction. It also helps in weight loss by providing the body with energy rather than sugars.

Jaggery contains sucrose which is a source of calories and does not have much in the way of fiber or water, two dietary factors known to help with regular bowel movements.

Jaggery has some benefits for the immune system, including it’s ability to provide antioxidants that may protect against free radical damage and its ability to increase the production of white blood cells.

One study found that jaggery consumption increases white blood cells in healthy individuals. Another study found that the main polysaccharide in jaggery, fructo oligosaccharides, have immunomodulatory properties and can increase the number of antibodies produced from a single injection.

Jaggery is a traditional Indian sweetener made from the sap of palm trees. It is a great source of iron and has other benefits as well. Jaggery can also be used for cooking in many ways like as a substitute for sugar, in curries, or even to make ghee (clarified butter).

Jaggery also has anti-inflammatory properties which can help prevent anemia due to its high content of iron, calcium, magnesium, zinc, copper, manganese, potassium, vitamin B6 and chromium. It has been shown to be an effective preventative measure for Anemia in children and pregnant women.

Jaggery has been used in traditional medicine to treat diabetes since ancient times. It is a low glycemic index food that can help lower blood sugar levels in diabetics, which means that it does not cause spikes in blood sugar levels. It also contains antioxidants and minerals, which are important for the body’s immune system.

Jaggery is a type of sugar that does not contain any calories. It is also low in carbohydrates and has a high level of fibre. It has been found to contain a large amount of natural sugars, which can help with weight loss. It also contains fibers, which help with digestion and absorption of nutrients.

The benefits of jaggery for weight loss include its high content of dietary fibre which helps to prevent constipation and provides energy while making you feel full. It also has a low glycemic index which means it doesn’t cause an increase in blood glucose levels and can help in weight loss.

Is jaggery good for skin?

Jaggery has been used as a remedy for skin problems in some cultures for centuries. However, there are no scientific studies to prove its effectiveness as a skin treatment.

Jaggery can be good for your skin if you are not allergic to it. It can help reduce acne and soothe sensitive skin. Some people believe that it is good for skin because it contains natural enzymes that help in the breakdown of keratin.

Jaggery has been used as a home remedy for skin diseases and conditions like acne, eczema, psoriasis, and rosacea. However, there are also some people who believe that jaggery is not good for skin as it can lead to hyperpigmentation and dark spots due to its high level of glucose.

Is Jaggery Better Than Sugar?

Sugar is a sweetener that has a plethora of benefits. It is made from sugar cane or sugar beet and is one of the most popular ingredients in food and drinks. Jaggery, on the other hand, is made from palm sap. It has been used for thousands of years in India and Southeast Asia.

Does Jaggery Have Negative Health Effects?

Many chronic diseases are caused by a high sugar intake, including diabetes and obesity. Excessive sugar intake may also contribute to heart disease, cancer and infertility.

Even though jaggery has a different nutrition profile, it is still sugar. Therefore, eating too much of it can still be considered harmful to your health.

In India, Jaggery has been used for centuries in cooking and sweets. It is also a traditional medicine that has been used to treat various health conditions such as diabetes, cough and cold, and indigestion.

Jaggery contains iron and other essential minerals that are good for the health. It has a low glycemic index and is gluten-free. It helps in reducing oxidative stress and blood sugar levels.

Jaggery tastes sweet and provides energy to the body, but it does not have any negative effects on health as long as you don’t eat too much.

Eating too much sugar from any source can increase your risk of obesity, heart disease and type 2 diabetes.

Is eating jaggery good for health?

Jaggery is a healthy alternative to other types of sugar, like white sugar and brown sugar. It has a low glycemic index (GI) which means it doesn’t spike blood glucose levels as much as other sugars do. It is also considered to be good for health because it contains minerals like calcium, potassium, and magnesium which are essential for maintaining bone density and body functions.

Is jaggery good for hair?

Yes, The benefits of jaggery for hair include the following:

Which vitamin is in jaggery?

The vitamin in jaggery is Vitamin B1, which is known as thiamine, which is found in all types of sugar, including white sugar. Jaggery also contains Vitamin A, B2, B3, B5, B6, C. It provides energy to the body by converting sugars into energy.

Can I eat jaggery daily?

Many cultures recommend Jaggery to help with digestive issues, and it can even help you avoid constipation. Most people are not aware that they can consume jaggery daily. It contains no calories, but it does contain natural sugars which are beneficial for the body.

It’s important to know whether or not you can eat jaggery daily or not because jaggery has less fructose than brown sugar, which is a type of sugar that contains high levels of fructose.