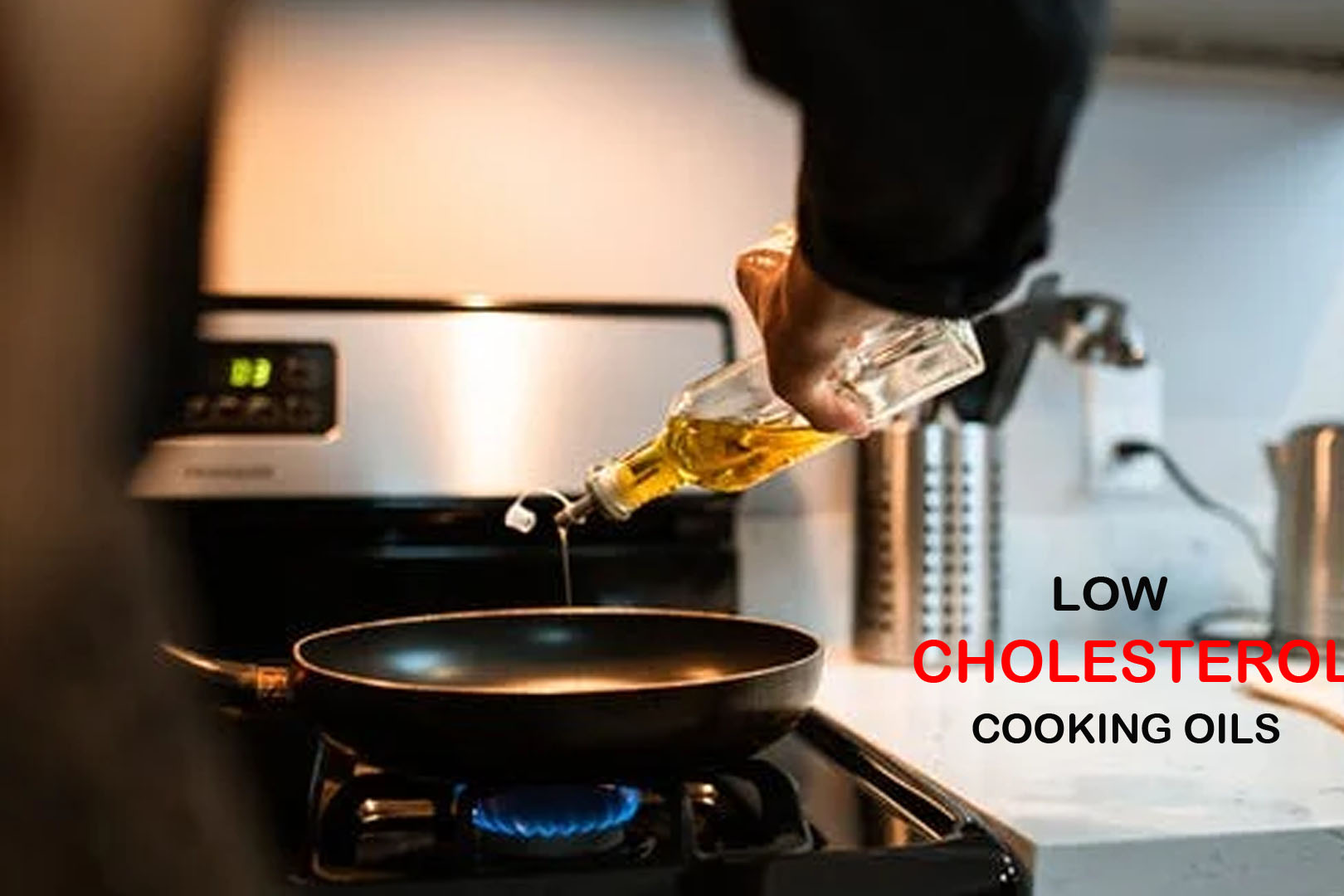 Cooking oils contain fats which many increase cholesterol levels in the body. Fat is present naturally in many foods which is referred to as invisible fat. Some of the foods that come under invisible fats include dairy products, poultry, meat, fish, nuts and seeds. Visible fats are made from the following products, such as cooking oils, salad oils, margarine, butter and lard.

Most oil bearing plant store their fat as triacylglycerol’s in the seed endosperm (eg., sunflower, soya bean) or in the fleshy mesocarp (eg., avocado). Some of the plants store oil at both endosperm and mesocarp (eg., palm oil and palm kernel oil).

Cooking oils play a vital role in all Indian dish as it is a main ingredient in cooking. Low cholesterol oil should be added, as oil generally added to food items to enhance its flavour during cooking. Moreover, selecting the correct and best cooking oil can help you from heart problems, cholesterol blockages, stoutness and also help food from processing issues.

There are many types of best low cholesterol cooking oil available in the market as follows:

Coconut oil is made from dried coconut meal or copra or flesh which as about 5% moisture. The oil we get from these copra varies from 60-75%. We get oil through solvent extraction method by pressing the cleaned and crushed copra. Coconut oil contains less unsaturated acids, so that it is high in saturated fatty acids. Generally, coconut oil has highest melting point. It is used to fry banana chips to enhance its flavour.

Coconut oil is majorly used in the manufacturing of margarine, soap, vanaspathi and in the preparation of pharmaceuticals etc. Coconut oil has many health benefits like providing smooth skin, boosts immunity and lowering blood sugar levels. It is also Loaded with vitamin E, antioxidants and polyphenols. coconut oil helps to prevent weight gain caused due to hormonal imbalance and is easily digestible.

Ground nut oil is the only oil that is widely used in India by about 50% of the population. This oil is a clear or translucent coloured oil which is used in cooking and in salad dressings. Groundnut oil is very high in mono-unsaturated (MUFA) and polyunsaturated (PUFA), which help in lowering LDL or bad cholesterol.

Groundnut oil is also one of the important fat used in preparing margarine. It’s a good source of vitamin E, as an antioxidant that protects the skin from acne or scars. It has high smoke points ranges 225°C which is ideal for making fried foods in this oil.

Groundnut oil is used in preserving fish like tinned sardines.

Soya Bean oil is the one of the worlds leading oil in consumption as well as in production. It is rich in both omega-3 and omega-6 fatty acids and unsaturated fats. It is also a good source of vitamin E, which helps our skin and hair grow healthy. Soya bean oil is widely used in preparing vanaspathi, mayonnaise, baby foods, cake mixes, non-dairy creams, sandwich spreads etc.

Rice bran oil is rich in monounsaturated fatty acids and high amount of saponifiable components like tocotrienols and oryzanols. These contains anti-oxidant activity. Soya bean oil is also rich in vitamin E, which gives oxidative stability to the oil.

It also has cholesterol-lowering properties, due to the presence of oryzanol. Compared to other oils, soya bean oil has higher cholesterol lowering capacity and high quality while cooking. Rice bran oil has highest smoking point ranging from 231-254 °C in which we can undoubtedly make deep fries.

Rice bran oil based on some experiments showed that this oil is less absorbed by the foods when they are fried in it when compared to foods fried in groundnut oil.

Sesame oil is obtained by cold pressing. It has light, delicate flavour. Sesame oil contains antioxidant system that comprising sesamel and sesamolional formed from sesamolin. It has a few restorative properties and contains omega-3 & 6 fatty acids. Sesame oil is useful for diabetics and enhances oral cleanliness for dental well being of a person. It also aids atherosclerosis, malignancy.

Some experiments by heating sesame oil shown increasing antioxidant effect. The seed that is decorticated contains about 25% of oil. The seed coat of sesame seed is removed before extracting oil. It is used in pickles for enhancing flavours and preservative properties.

Mustard oil is a great oil substitute for traditional cooking oil. It has sharp taste and odour and it is slightly more viscous than other oils. It is also often used as a stimulant to help digestion and circulation. This oil can help protect the skin, due to its antibacterial properties. Mustard oil also fights germs and virus, great to prevent cold, coughs. Mustard oil is used in cookery like baking, food processing and in making pickles. The smoking point of mustard oil is 250°C.

Canola oil is rapeseed oil and the name is derived from canadian and oil. Canola oil is rich in omega-3 and omega-6 fatty acids. cholesterol-free and is a good source of vitamins E. Canola oil has very less amount of saturated fats, so that the smoking point of canola oil is high where we can make high heat cooking with this oil. Smoking points ranges above 400°C.

Palm oil is produced from the fruit of the Elaeis guineensis plant. It is used world wide as a cooking oil, in margarines and shortening and as an ingredient in fat foods. Palm oil is chosed by food manufacturers as it has distinctive quality, requires little hydrogenation and lengthens he shelf life of products. Palm oil is superior to many other oils in oxidative stability.

It contains equal proportions of saturated and unsaturated fats. Vitamin E especially tocotrienols can suppress the synthesis of cholesterol in the liver. Palm oil has less smoking point ranging 235 °C.

Avocado oil is obtained by freshly pressed avocados. It is said to be a perfect cooking oil as it has a mild flavour and high smoke point. It contains a high amount of MUFA and low PUFA fats. Avocado oil is used for baking and roasting purposes.

Olive oil has a main component called oleic acid derived from MUFA and also contains PUFA and saturated fats. Olive oil is rich in antioxidants, vitamin E, A and phenols. These compounds can over come coronary heart disease and cancer. Smoking point of olive oil ranges around 190–207°C which is suitable for pan frying. But refined olive oil has highest smoking point which is ideal for deep frying temperature ranges 160°C and its smoking point is about 230°C.

It is the highest grade of olive oil. It is unrefined oil made from first pressing of olives , so that we get natural activity of olives with less than 1% acidity.

Olive oil is mixed with 1/4th part balsamic vinegar, salt and pepper to make salad dressing. A few drops of olive oil on pizza or pasta gives an authentic Italian pizza. Extra virgin olive oil has less smoking point that ranges around 190°C. Smoking should not exceed even 191°C, if it happens free radicals develop in the oil.

Ghee is known as clarified butter. The high quality ghee has saturated fatty acids. At high temperatures, ghee is more stable than butter as it doesn’t have any proteins or sugars to burn. Ghee is a good choice for sautéing and frying foods at high heat. Ghee also had highest smoking point ranging from 170°C to 250°C. But is it very best to stop cooking ghee above 200°C as it may become rancid at 250°C. Ghee contains more saturated fat and also contains cholesterol. Ghee is also rich in vitamin A, vitamin E and vitamin K.

It is very good idea to add at least 2 tablespoons of ghee in your daily diet as it helps for digestion, improves brain function and also helps in weight loss when combined by exercise. Ghee is said to improve immunity, memory, bone build up and increase energy levels of a person.

The type of cooking oil you use can have a significant impact on your health. This is because the oil you use has a direct impact on your dietary intake. The best oils to cook with are those that are low in saturated fat and have a high smoke point. Oils that have a high smoke point include olive, avocado, peanut, and coconut oils. They are all healthy fats that help lower cholesterol levels in the body.